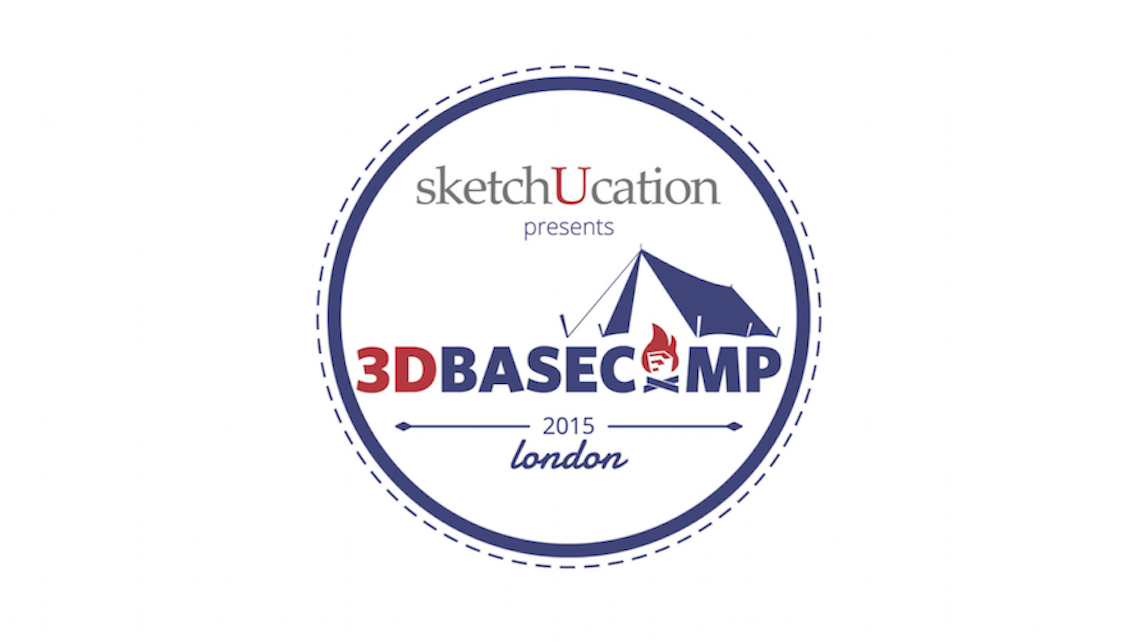 Over 150 delegates descended on the RIBA in London this week to attend the UK's first 3D Basecamp event for SketchUp users. Organised by SketchUcation, delegates included Architects, designers and even woodworkers along with members of the SketchUp team. 3D Basecamp is a gathering of other SketchUp ‘super users’ to share knowledge and learn new techniques or to promote add-on programs, known as extensions or plugins, that will improve workflow; making the production of information faster. All previous Basecamp conferences had taken place in the US.

Peterloo Estates Director Daniel Barker has been a SketchUp user since 2005, back when Google owned it, so he went along to learn more:

"I first downloaded a free copy of Google SketchUp in 2004 as a fun 3D modelling tool to experiment with. The main attraction at the time was largely the fact it was free. Having studied surveying as a post-grad I had a good understanding of scale drawing and could produce information by hand but doing it digitally was an area of particular interest for me; a closet architect perhaps. Compared to industry standard CAD programs the cost benefit analysis was a no-brainer. AutoCad, Vectorworks and others were all a minimum of £3-5,000 per licence and at that time there was no justification for us needing such a serious CAD capability at Peterloo Estates. All I really wanted to do was keep in house some of the very early viability work that I had previously asked a friendly architect to do for me at risk; there are only so many times you can do this however before they really deserve a decent job out of it! SketchUp, however, was free and did everything I needed at the time to carry out some indicative massing studies or measure site area’s accurately via the Google Maps function to complete this early ideas stage.

"Fast forward to 2015 and the past two intensive days at the UK’s first 3D Basecamp has confirmed in my mind that SketchUp is no longer a dirty word among fellow professionals, particularly architects, but in fact there is an uprising that has occurred whereby SketchUp is fulfilling the utopian dream of those using CAD on a daily basis to really be a program that does everything; and I mean everything!

"For two days i’ve listened to complaints that traditional 2D software such as AutoCad and Vectorworks is fine for line work and plans but a project is often as much about selling the ideas and design principals, which rarely come across in 2D. The beauty of SketchUp is that it can do the 2D stuff just fine but in conjunction with the 3D modelling as well, all at the same time. One of the main areas of interest for me is SketchUp's BIM integration capability; which was covered during the conference. Building Information Modelling (BIM) has totally revolutionised the industry's approach to building design and SketchUp have wasted no time in embracing this change whilst ensuring their platform remains current and expandable.

"Andrew Dwight introduced a fantastic plugin he created for his own construction business in Australia, which is due to be rolled out in the UK imminently using UK specific building material information. In effect the program, PlusSpec, allows you to select a building fabric to draw with, such as wall for example, and not only is all the geometry associated with that wall already drawn for you (once you’ve drawn the single line where the wall will go) but all the BIM information about that wall is contained within it; including cost elements.

"So for example if you drew 4 walls of a house and you had decided it would be a traditional double-skin masonry construction technique you would select ‘double-brick’ from the wall material options, draw the four lines and on screen you would see a fully modelled double-skin structure. Not only that, if you then hit the ‘take off’ button, it would provide a full take off for the entire model broken down into material components. The price parameters can be manually adjusted but you can very quickly design, draw, adjust and price an entire project all from one piece of software and in far less time than it would take in programs such as Revit. 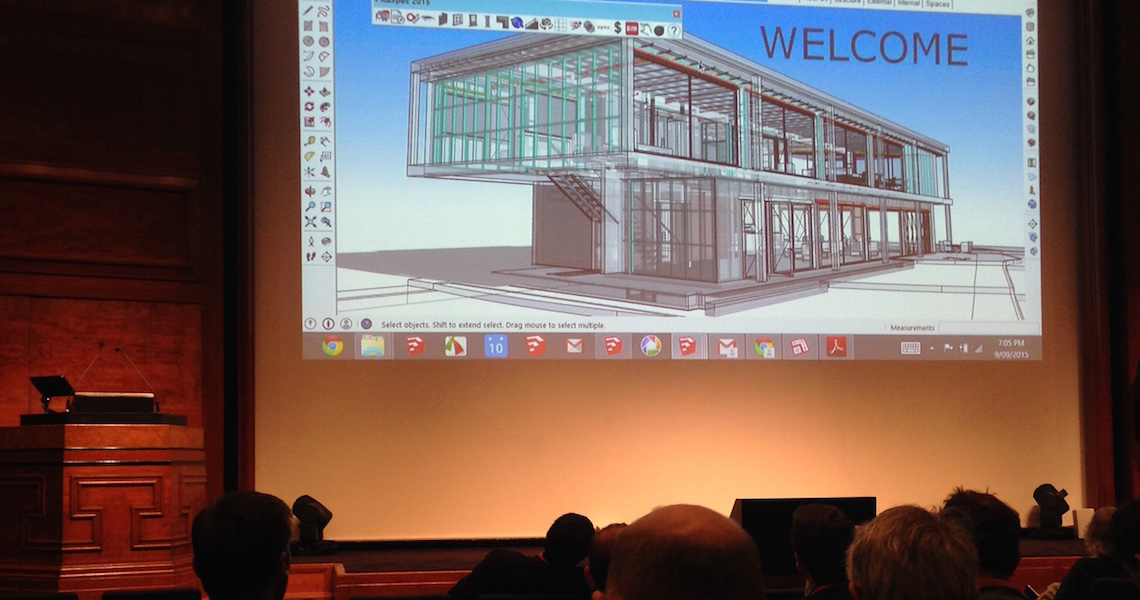 "Where SketchUp outperforms Revit is its native ability to modify or adjust the drawing or components manually so as to avoid overlaps or handle awkward non-standard building forms. Another nice feature of PlusSpec is the automatic design functions which will calculate real-life building solutions for components you add to the model. For example, if you had a wall and you wanted to add some windows, you would select a window manufacturer who’s products were already modelled and priced. When you select the size of the window it would add the correct number of panes into the frame based on the manufacturer’s recommended specification. Not only that it would calculate the top-plate or lintel requirements above the window dependant on the span. As the span gets wider the lintel would automatically become larger to cope with the structural requirements. If you went to an extreme span, beyond a standard length of steel commonly available, it would still draw it but highlight the component as something that requires a structural engineer to review because of the abnormal length specified. For Peterloo Estates, this tool could enable us not only to accurately model a new development opportunity quickly using real-time construction elements but also provide the detailed cost information for a relatively quick viability assessment - all from one platform using just a few mouse clicks.

“Plugins such as PlusSpec do not replace an architect, building surveyor or structural engineer in a real project moving forward but they do replace the early speculative time that these professionals might give you for a project that actually isn’t worth pursuing on a viability basis.

"Another plugin hailed by many at Basecamp as the final piece of the SketchUp package is Scalp which adds a professional section cut functionality missing from SketchUp in isolation - it has a section function but it’s not very good. Scalp can read the model and material choices, again linking into BIM data, so that when you make the section cuts, the material hatching is clear and identifiable without the need to manually hatch areas. Scalp also renders this information in realtime within the model as well as during the output production stages in 2D for construction drawings. Furthermore because the information is linked, if you change the model, your construction drawings automatically update accordingly.

"The deadpan double act of Felix Heuman and Anders Lyhagen showed delegates how to create classic architectural elements using SketchUp. This somewhat labour intensive modelling really demonstrated SketchUp’s power rather than day-to-day practical use for typical property ventures but nevertheless made for an interesting and entertaining seminar. The results of their intricate work were highly impressive, especially following a 3D render process.

"Another useful planning tool for Peterloo Estates was a plugin called LightUp Analytics which takes shadow studies to a whole new level. This program analyses the sun’s rays on a building form to calculate how much sunlight it would expect to receive in a given year. This can be useful for BREEAM assessments along with solar gain studies. LightUp references current, historic and projected climate data. I can immediately see the benefit during the planning stages, for example, to show graphically the effect of the building form on it’s surrounding neighbours.

"Immersive 3D is also becoming a major application for this software. Using models in conjunction with virtual reality goggles enables users to walk through designs and concepts as if they were physically built. This advance in technology surpasses ‘fly-throughs’ of yesteryear. Similarly the advancement of photo-realistic rendering software again takes output models to a new level accurate visualisation, in a real-world context.

"Finally a neat plugin for modelling random features such as trees or grass in a landscape setting was Skatter. This extension randomly (although you can adjust its randomness) places objects of your choosing across a given area. Skatter is still being tested and isn’t ready for release at present but you could see its capability. Again, as with all these sessions at Basecamp, the common theme is speed to produce the information. Tasks that can take hours to do manually can be completed in a couple of mouse clicks.

“All in all 3D Basecamp was a hugely worthwhile event, not least to give comfort that SketchUp is no longer a dirty word amongst professional users but in fact a market leader, leaving the established 2D platforms behind in terms of all-in-one functionality and value for money"