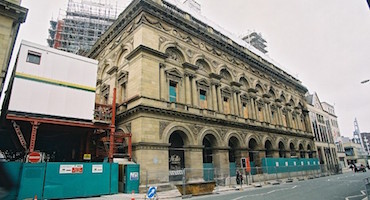 The hall of fame
The only building in Europe named after an economic theory, the Free Trade Hall has played host to many famous names from William Gladstone and Benjamin Disraeli to Charles Dickens and Oscar Wilde. Bob Dylan played his now infamous 'Judas' concert at the hall in May 1966. 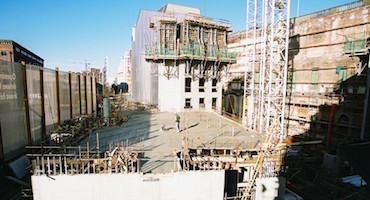 Façadism at its best
Following World War 2 bombing raids, only the front façade of the Free Trade hall remained in its Victorian, Edward Walters designed, form. Peterloo Hotels retained this, adding a new 14-storey bedroom block to the rear with a glazed atrium linking old and new.

Façadism at its best
The completion of the Free Trade Hall hotel in May 2004 provided Manchester with it's first 5-star AA Rated hotel in the city. The hotel opened with a wedding of two former members of the Hallé Orchestra, who had been based at the Free Trade Hall since Charles Hallé's first concert in the hall in December 1856.
Previous  All works Next